The purified waste water in Tzor'a reservoir is used for agriculture in the Tzor'a Valley. At this time of year most summer crops have already been harvested and irrigation is no longer necessary. As a result excess water flows from the reservoir and around the ringing site, and makes the habitat much more attractive for wagtails, Bluethroats, Phylloscopus warblers, and more.
Last Friday (22/10) around the reservoir I ringed 120 birds, including a massive wave of Bluethroats (55), Caucasian Stonechat, Moustached Warbler and other Acrocephalus warblers (Great Reed, Clamorous Reed, Marsh, Sedge and Reed Warblers), White Wagtail (2), Zitting Cisticola, Moorhen (2), Wryneck (2) but only 4 Willow Warblers!
﻿
﻿ 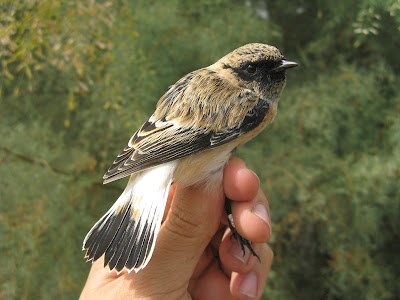 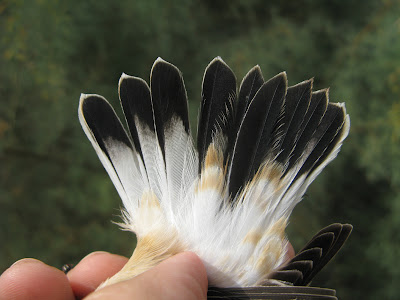 On Sunday (24/10), at the same site using fewer nets I ringed 200 birds (from 29 species!); most Bluethroats have moved on and a massive wave of Phylloscopus replaces them. I ringed 70 Willow Warblers and 10 Chiffchaffs. The previous cool and moonlit nights must have provided excellent migration conditions for passerines. Other interesting species included a Little Bittern, European Stonechat (2), an Indian Silverbill, Spanish Sparrow, first Serin of the season and more.
﻿ ﻿
﻿﻿

This morning (25/10) at the Jerusalem Bird Observatory (JBO), we (Avner and myself) controlled a Hungarian Blackcap - this is the first Israeli foreign control this autumn! Other nice birds were a Wood Warbler and my first Chaffinch this season.
﻿﻿﻿
﻿
﻿ ﻿﻿ 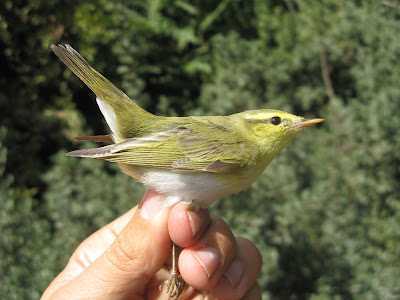 Recently we got reports on two of our ringed birds. First was a Crane ringed at Hula Valley in February 2008 by Itai Shani found dead in southern Ukraine (1475 km), it's only the third Israeli Crane recovery. Second is a Spanish Sparrow hunted last week in Cyprus.
﻿
Newer Post Older Post Home