Last days were the peak of Lesser Spotted Eagle migration over Israel. About 100,000 eagles passed from Eastern Europe to their African wintering grounds - all of the world population passes through Israel. October 1st was a double lucky day for foreign ringed eagles read in Israel!
Edith Katsnelson saw a colour-ringed juvenile LSE in the Ben-Shemen Forest, this forest is regularly used by LSE flocks for roosting every year. The Eagle was identified, and had been ringed this summer as a nestling in its nest at Kloda Duza, Lublin, Poland (2415 km). This is only the fourth LSE controlled in Israel; previous controls were from Slovakia and Russia. 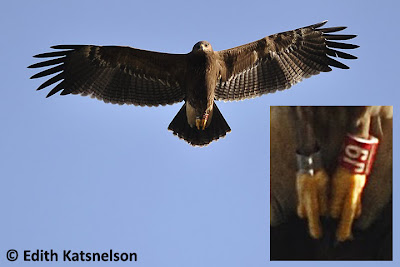 Often LSE flocks contain a few other eagles species, especially Steppe Eagles but also Greater Spotted and Eastern Imperial Eagles. The second control for that day was a Greater Spotted Eagle with wing-tags. It was identified as a juvenile ringed also this summer at 'Pripyatski' National Park, Belarus (2292 km). This is the third Belarus ringed GSE found in Israel; we have had another GSE control from Poland. 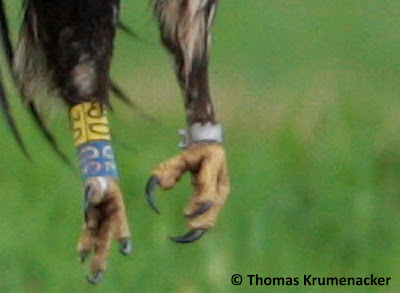 Thanks to Edith Katsnelson for the report and images, to Jan Lontkowski, Eagles project coordinator (Poland) and to Belarus Bird Ringing Center for sharing their data. Thanks to Thomas Krumenacker for the beautiful images.
Newer Post Older Post Home