Dice Snake in the net!

Last Friday I ringed at Tzor'a Valley Ringing Station. After the setting the nets up I noticed that the lower pocket of one of the nets was lying mysteriously on the ground. I approached to stretch the net and I was surprised to see a Dice Snake (Natrix tessellata) tangled in the net! It was very difficult to extract it from the net, even after cutting the net. I have caught many animals apart from birds in my nets, including 7 bat species, dragonflies and many other flying insects and crustaceans (!), but a snake was new for me.
﻿﻿﻿ ﻿

Other birds in my last ringing sessions included first significant numbers of Bluethroats - few retrapped from last years, a few Marsh Warblers (this is good season for this species), Clamorous Reed-Warbler, a few Sardinian Warblers, Whitethroats and my first Chiffchaff for the season. In JBO, a few 'European' Redstarts are ringed every session.
﻿
﻿﻿ 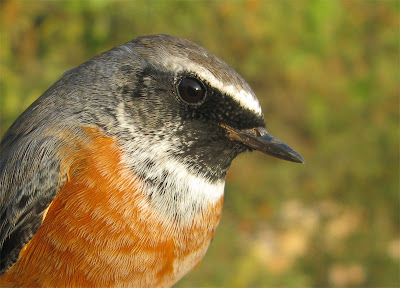 Recently we got a report on one of our ringed Kestrels found dead in eastern-Jordan, near Shaumari Wildlife Reserve, on the main road to Saudi Arabia. This Kestrel was ringed (05/2010) as pullus in its nest box in the Jezreel Valley (170 km), as part of a national project that uses kestrels and barn owl as biological pest control agents. These records of short distance dispersal, especially in young birds, are always surprising and interesting.