A week full of rings…

Last week was a busy week: I ringed almost every day at the Jerusalem Bird Observatory or at Tzor'a Valley Ringing Station. In my spare time I prepared our annual national ringing conference, which will take place on September 24th. My main mission is to prepare the 2009 national ringing report.
On Monday, Wednesday and Thursday I ringed in Jerusalem, and caught 115, 40 and 80 birds respectively. Now is the peak of autumn passerine migration in Jerusalem. Many warblers, Common Redstarts and other migrants feed on the abundant pistachio fruit. Until this week the most common migrants were Lesser Whitethroat and Eastern Orphean Warbler, but now their peak has passed and most common is Blackcap. Other good migrants this week included a few Thrush Nightinales, our first Common Nightingale for the season, Ehrenberg's Redstarts ('samamisicus' form of Common Redstart) - including spectacular males, Marsh Warbler, two juvenile Barred Warblers, a few Spotted Flycatcher and more.
In Tzor'a Valley Ringing Station, I ringed on Tuesday and Friday, and caught 80 and 60 birds respectively. Mainly Acrocephalus warblers and other common migrants included my first Willow Warblers and Sedge Warblers of the season. Common Kingfishers migration is peaking now and we ringed more than 15 birds. Most of our Common Kingfishers are juveniles while most adults stay further north for the winter. Last autumn I ringed only one adult but this week I was lucky with two adults: one was a nice retrap, ringed on October 2009 as juvenile. Adult kingfishers are identified by their arrested primary moult, different from the fresh, uniform and dull plumage of juveniles. Another nice retrap this week was a Great Reed Warbler from previous autumn. 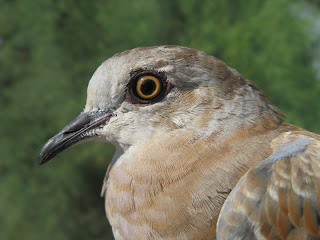 During this week I heard from Ohad Hatzofe (NPA) that one of his Eurasian Griffons that had been ringed in Gamla Nature Reserve, Golan Heights as a second year last spring was seen this week in the Julian Alps, Italy, 2432 km from the ringing place. Most of our Eurasian Griffon recoveries are from the Balkans and southern Europe; this is definitely an interesting recovery. Thanks to Ohad for the report.