Again, I spent the beginning of the week with terns… Now we (Ohad Hatzofe and myself) ringed Common Tern chicks in the Hula Nature Reserve colony. Many birds around included Pygmy Cormorants, Purple and Squacco Herons, Glossy Ibises, Garganey, Marsh Harrier, Yellow Wagtails and more. The closed section of the Hula Nature Reserve is such a beautiful place and I was lucky to visit there.
Later that night we returned to Atlit salt pans to our regular mist-netting session, that produced Little, Common and White-winged Terns. One of the Little Terns was an ancient control ringed in summer 1999. In the morning we continued to ring Common Tern chicks in the Ma'ayan Tzvi colony. This 'evening-night-morning' session produced more than 70 ringed terns. 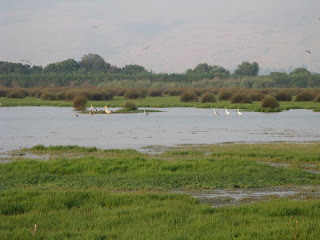 Last Tuesday (17/08) I ringed at the Jerusalem Bird Observatory (JBO). It was a hot morning though I ringed 60 birds. Most were migrants: Eastern Olivaceous Warbler, Eastern Orphean Warblers, Lesser Whitethroats, Blackcaps and 2 Marsh Warblers. Marsh Warblers are uncommon migrants in Israel, with about 50 ringed every year, most in the Hula Valley, but it is regular on passage in August-September in Jerusalem.
Marsh Warbler is considered by most ringers as an identification challenge; it is very similar to Reed Warbler, but I took the first bird out of the bag and called 'Marsh Warbler!' This bird was clearly olive, not the warm brown of Reed Warbler, and its rough croaking call in the hand left no doubt. Other identifications pointers were wing length of 70 mm, short and pale hind claw, thicker bill and short notch on P9.
Newer Post Older Post Home