After eight months without terns I visited Atlit Saltpans for ringing. The first night of this season (29-30 April) was a complete success with 64 birds caught; 60 Common Terns including one retrap from last year, 1 putative White-cheeked Tern, 1 Little Tern, 1 Slender-billed Gull and 1 Little Stint.
The putative White-cheeked Tern is 2nd calendar bird with typical primary moult and winter / non-breeding-like plumage. The main features pro White-cheeked Tern are a grey rump, uppertail and tail rectrices without contrast to mantle colour; in Common Tern there is a clear contrast between the grey mantle and white rump (see image).

Second feature is larger tail / wing ratio (longer tail, shorter wing). Tail length was 169 mm, the longest tail I have measured (n=387). The wing/tail ratio is 1.60 - a very low figure, lower than the normal range of 1.62-2.85, average 2.00 (n=386); in 2nd calendar birds (n=10) the range is slightly higher, 1.93-2.75, so this bird has a really exceptional wing / tail ratio.
Another aspect of wing/tail ratio is the distance between wingtip and tail; in this bird the tail is long than the wing. In other birds caught this night (all adults) the wing was longer.

In the past, this subject was discussed after I caught terns with rump as White-cheeked and dark underparts. But this possibility was overruled after images of mating Common Tern X 'like White-cheeked' Tern in my ringing region were posted. This bird look better for a genuine White-cheeked Tern, especially the tail pattern. This species breeding in the Red-Sea and Indian Ocean is little known, especially in respect to the amount of variation of these features in young birds. I searched for information about identification and found only a short article from 1982 (Dutch Birding). I will be glad to receive some information or ideas, especially biometrics. 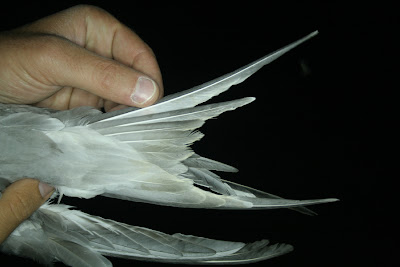 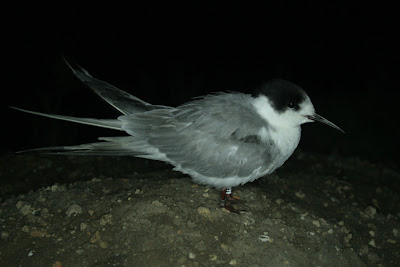 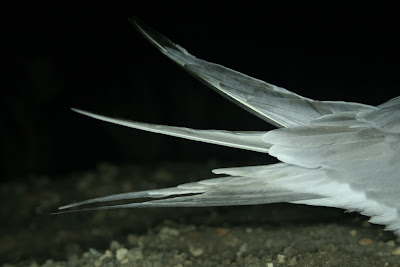