On Friday (11/11) I ringed again at the Tzor'a reservoir, with a large team. After only half an hour of sleep, I returned to the snipe's little puddle. The result was very similar to previous morning. We caught 6 Jack Snipes, juvenile Night Heron and the Pin-tailed Snipe was recaptured, this time on the other side of reservoir. This was a nice reward for my regular volunteers and for the 2-3 twitchers that joined us.
Other notes from this nice week at Tzor'a Valley Ringing Station:
First, Cetti's Warbler dynamics: in Tzor'a this is a resident species but also wintering and migrant population appear in late autumn; the distinction between those populations is very difficult. In these days we noticed a small influx of unringed Cetti's Warblers. Most importantly, these birds are larger and with slightly different tones compared to our breeding population. My breeding males have wings of 63-66 mm. On Thursday I ringed a migrant male with wing of 71 mm and tail of 70 mm; this bird must belong to the form albiventris, breeding in Kazakhstan. This is only 4th record of this race at Tzor'a; all records occurred during the second week of November and all birds had a wing length of 69.5-71 mm and long tails. The females are harder to identify because the large overlap in measurements with other races.
See below the graph showing the ratio of new Cetti's Warblers in May-November 2011. First peak in June represents the local juveniles fledging and dispersing in Tzor'a. Most ringed in August-October are after post-breeding dispersing birds and short distance migrants. For example this autumn I caught two birds ringed nearby: one 9 km NE (controlled in September) and second 11 km NW (controlled in October). The second peak in November represents a significant migrant wave. 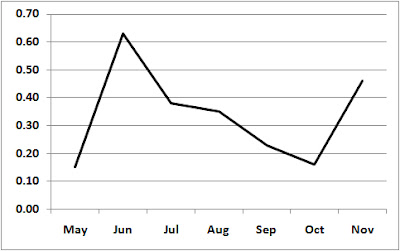 Another Whinchat was ringed on 10/11; this is unusually late for this species. Until this year I never caught any Whinchats at the reservoir, only in the fields. This autumn I have already six at the reservoir habitat.
This year is also unusual for Acrocephalus warblers. Most of these birds have already left south but Moustached Warblers are winter visitors to Tzor'a and this year I catch exceptional numbers. Until last week I ringed 13 birds, the highest number ringed in one year at Tzor'a (the average is four per year).
I wrote previously on Reed Buntings, but with two more from Friday and a total of 7 last week they are wroth another mention. Many more can heard calling around my site; no doubt this is a special season for this species.
When my returning winter visitors appear, I often receive some exceptionally old recaptures. The two most interesting were Cetti's Warbler S-39797 ringed in May 2005 and Chiffchaff ringed in November 2007; see more in the summary table below: 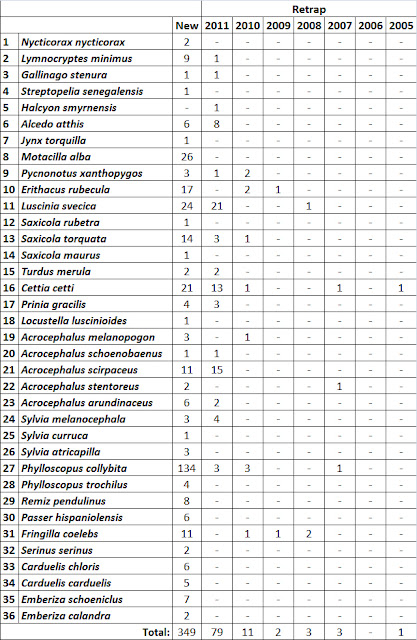 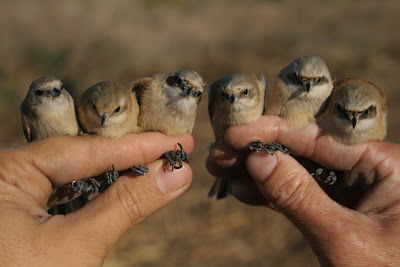