From autumn to winter within a week

After last week that was exceptionally rainy, I was eagerly waiting for the first sunny days; those post-storm days often result in many migrants knocked down to the ground. I ringed at the Tzor'a Valley Ringing Station between Sunday and Tuesday (20-22/11) and indeed I was not disappointed. The area was very wet with fresh grass. At first I got very wet from the last shower on Sunday morning, but the continuation was nice and dry. On Sunday and Monday mornings at the reservoir I ringed 120 and 140 birds respectively. Total of those three days was 444 birds; these were nice autumn days. I returned to the area on Friday and discovered that winter suddenly settled, with a minor catch of only 56 birds. In winter most populations are rather sedentary, and that was the case on Friday: most birds were recaptures with a few from last years.
The total of this successful week is exactly 500 birds, 113 were recaptures; the most ringed species were Chiffchaffs (162), White Wagtails (70) and Spanish Sparrow (25).
The nice catch of Reed Bunting continued with another 14 individuals, including a nice adult male.
In Tuesday evening (22/11) I ringed this nice adult male Caucasian Stonechat. It shows the important ID signs: paler plumage, white base of tail feathers, pale rump, dark underwing and long wing of 74 mm. 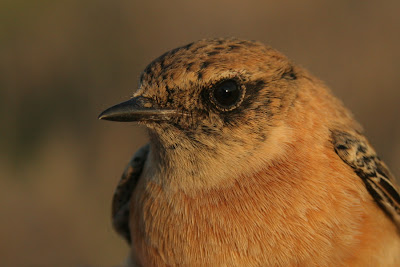 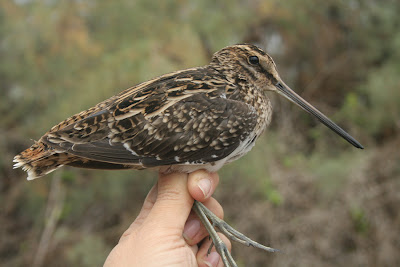 On Friday (25/11) I ringed a juvenile Marsh Warbler; this is the 12th for this successful season and a month later compared to normal passage. This bird should have been now in Kenya.
Many thanks to Ron, Avishai, Rafi, Eli and Shahar for their help.