Last night I ringed at Atlit saltpans, the capture was slow but Sandwich Tern and a few waders were a refreshing change. Sandwich Tern is a first to me in the hand, I was surprised by the differences between Sandwich and Common Terns; Sandwich is a considerably more massive bird in the hand. Other birds ringed were a few Common and Little Terns, Common Sandpipers and Little Stint.
At the JBO, the warbler migration has become stronger, mainly with Eastern Orphean Warblers, Lesser Whitethroats and Eastern Olivaceous Warblers. Adult passerines which undergo partial post-breeding moult and undergo their complete moult at African wintering grounds migrate before their juveniles; Olivaceous Warbler is an example of this strategy. But species such as Eastern Orphean Warbler and Lesser Whitethroat which undergo complete or suspended post-breeding moult at breeding site, before their autumn migration, migrate after their juveniles. Today I ringed the first adult Eastern Orphean Warbler with suspended moult, was easily differentiated from the post juvenile partial moult. 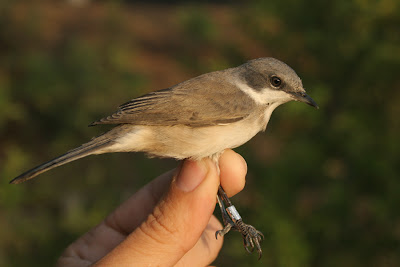 Other photographs were taken at the Tzoraa valley and from another visit to the Judean Desert.
Newer Post Older Post Home