On 22/3/10 the IBRCE (Eilat) team controlled a Red-rumped Swallow with a Greek metal ring; this was the first Red-rumped Swallow foreign control in Israel. Finally we got the ringing data from the Hellenic Ringing Center. The swallow was ringed in spring 2004 (!) in Evros Delta on the eastern Mediterranean coast of Greece (1494 km). Red-rumped Swallows are common summer visitors and migrants in Israel. In recent years the IBRCE team started working on swallow roosts and ring about 300 Red-rumped Swallows every spring (March), contrary to previous years with less than 100 ringed annually in Israel; their effort was worthwhile!
View Red-rumped Swallow.kmz in a larger map
﻿
﻿﻿﻿﻿ 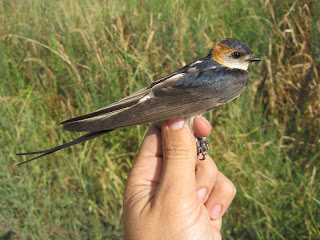 In addition, we got the ringing data of a Greek-ringed Nightingale that was controlled at the Jerusalem Bird Observatory (JBO) last spring. The Nightingale was ringed in autumn 2009 also in the Evros Delta; this is an important stopover site for birds crossing the Mediterranean. Nightingale is a common migrant in Israel; we ring about 200 annually; however we have only two old nightingale controls from Cyprus (1969) and Egypt (1971). This is definitely a nice control.
Thanks to the Hellenic Ringing Center for sharing their data.
Newer Post Older Post Home