Last week Hans Jurgen Eilts from Germany joined me to ring in Tzor'a Valley. Together we ringed about 300 birds. Late autumn migrants and first winter visitors were picking up: We ringed the first Robin, European Stonechat, Moustached Warbler and Chaffinch; Chiffchaffs and Bluethroats were also very common. The most interesting birds this week were the third River Warbler of this season - until this year I never had this species in autumn; the first Common Rosefinch this autumn and the second Wren ever ringed at Tzor'a, the previous one was ringed in February 2005.


Thanks to Hans for this nice week. 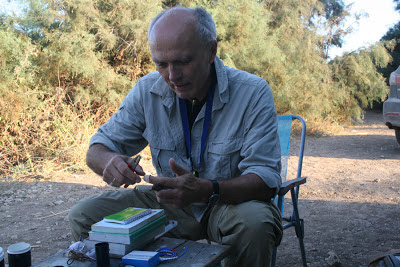