Sorry for the delayed summary, lately I have been very busy.
So, September is the first month when we really feel the autumn. During 10 ringing sessions I caught 1038 birds of 50 species. Largest numbers were swallows with 415 individuals and Reed Warbler with 104 individuals.
On September 25th I ringed the first Golden Oriole for Tzor'a Ringing Station and on 28th the first ringed Eurasian Cuckoo. Other species worth noting were Water Rail (1), Corncrake (1), Zitting Cisticola (10), River Warbler (1) - only second for Tzor'a, Marsh Warbler (7) and Cretzschmar's Bunting (11).
I was ringing several times in a Paprika field, near my regular spot. This site was very productive with many Savi's Warbler, shrikes - including a nice wave of about 15 Lesser Grey Shrikes early in the month, also very nice flocks of Ortolan and Cretzschmar's Bunting. Late in the month the Alfalfa field became very productive with a few Lesser Kestrels and Red-footed Falcons and the regular huge flocks of Yellow Wagtails. 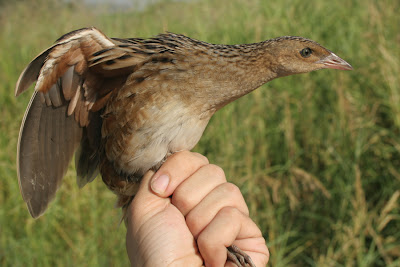