During 2011 my ringing totals were 6783 birds of 83 species, during 106 ringing sessions. This my second-best annual total, after the exceptionally high effort of 2008 that produced 14000 birds (see figure). Another 1354 birds were recaptured, 3 of them with foreign rings and 5 Israeli controls from other ringing sites. 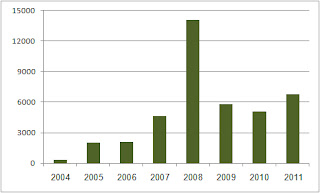 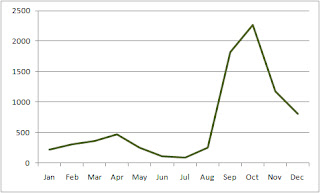 Tzor'a had six new bird species ringed during 2011: Ringed Plover, Ruff, Pintail Snipe, European Nightjar, Hoopoe and Red-breasted Flycatcher.
The ringing work during 2011 based on my loyal volunteers. 42 different volunteers participated in 2011's ringing - huge thanks to them. Also we unveiled the new Cetti's Warbler logo. Already on 01/01/2012 I produced an annual ringing report, in Hebrew, but hopefully I will produce an English one soon.
During the last days we ringed only in the wagtail roost; the numbers went down and the rainy weather also hampered our ringing efforts. So, I look forward to spring and to another nice year.
Newer Post Older Post Home