Since 2006 summer I've been ringing regularly during the summer and breeding season around the Tzoraa reservoir. This is a wet habitat with raspberry bushes, Tamarisk trees and large reed-beds (in Israeli standards). The result of those conditions after 08:00 and 30°C are a steamy and hot place.
Despite the rough conditions, or perhaps thanks to these conditions, it's a very good breeding site for a few warbler species: Cetti's, Reed, Clamorous-Reed and Eastern Olivaceous Warblers. The long term monitoring in this site results in very interesting data, as most of 'my' breeding pairs are ringed and return year after year to same site. At this time of year most of their nestlings are already flying around and also get ringed.
Today (24/06) I caught 40 birds, including a few recaptures from 2006-08.
The adult Reed Warblers are easily identified by their worn and brown-grey plumage, distinct to the warm-brown and fresh juvenile plumage; few of the adults have already started their partial head moult (they moult the feathers, not the whole head).
Also Cetti's Warblers begin their moult, juveniles - partial and adults - complete. This time I ringed tens of them and later on, during the year, some of those birds will get recaptured again and again.
Flying around were a small flock of Lesser Kestrels and my first Green Sandpiper for the autumn. 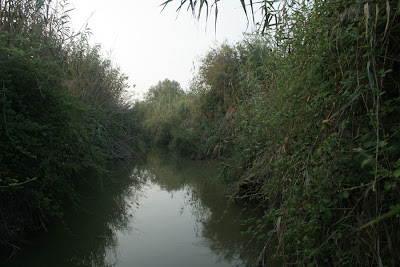