There is an important discussion going on these days about the possible causes of the unusual spring we're experiencing in Israel for the second consecutive year. As it's a popular discussion these days I must take part in it. 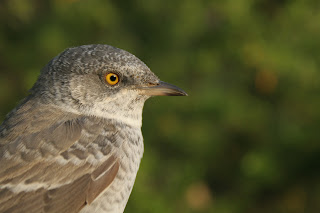 First the facts in short:
At the Arava Valley and southern Israel lack of migrants is very evident. At the Eilat Ringing Station - simply no birds, or only few tens every ringing session.
At the Jerusalem Bird Observatory real spring migration started three weeks later than normal and also now numbers are slightly lower than average. Thrush Nightinale is virtually absent. At Hula Valley numbers are also low, and species diversity is low. Barn Swallow is normally a massive spring migrant in Israel; these flocks are seriously missing, mostly at Hula Valley and Eilat but in other parts of country as well.
In my local area, Tzoraa Valley (Judean lowland) this spring is average, but in this area spring migration is normally pretty slow, much slower than autumn.
The possible causes of these observations can be two: crashing bird populations (either in their breeding or non-breeding grounds) or irregular migration patterns. My opinion is less pessimistic than other Israeli field ornithologists. The drop in bird populations is a fact, but it might be causes by several processes - expanding agricultural areas, reducing natural habitats, climate changes, desertification, hunting etc. In my opinion what we're experiencing this season is a combination of several factors - steadily declining populations and unpredictable environmental factors resulting in irregular migration patterns.
But perhaps my personal opinion is biased by the fact that in my local patch there are no apparent changes. I hope that after the autumn my opinion will remain the same.
Here are some unhappy links:
The Israeli hopeless birders in Israbirding.com forum, More from Hungary and more general views from the world.
Meanwhile, here are a few more joyful recent images (before these birds become extinct…)