Re'a Shaish reported from Eilat Ringing Station:
On the 5ht December, afternoon, Tzadok got some interesting field intelligence from Itai Shani, which reported a Bonelli’s Eagle hunting pigeons and doves around the K19 cowsheds. The next morning, Tzadok and I drove towards the location eager to locate and trap the bird. After an hour or so the beast showed itself, perched on the cowsheds roof. The trap was placed, and after a few minutes the eagle was caught (!). A shiver went through my spine as I first lay hands on this amazing raptor. We took the bird down to the ringing station, collected the data, took some photos and quickly released it. 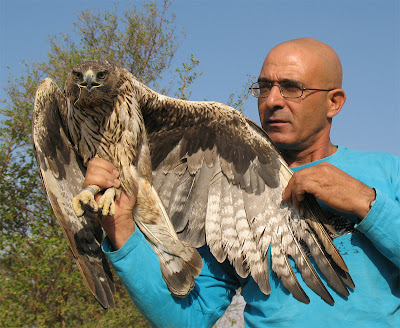 The Eagle was aged 3rd calendar year, having 2 retained juvenile secondaries and primaries together with two generations of adult flight feathers, as well as buff-orange wash to breast. The weight of the bird is mediocre; 2050 gr. was not helping determine its sex.
The fearsome hind claw, 39 mm, and culmen, 31.6 mm, were definitely a refreshing change from the Eurasian Sparrowhawks we catch these days… 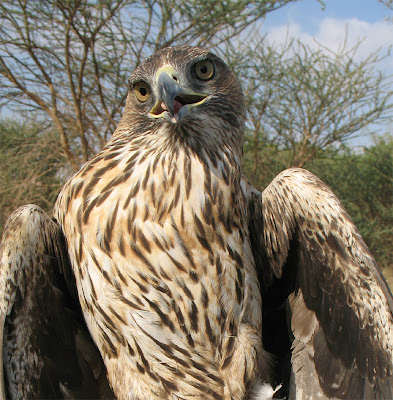 Trapping of Bonelli’s Eagle is extremely rare in Israel. Being a rare passage migrant and scarce winter visitor, might also be breeding in the Jordanian side of the border, in the area, this bird is a perfect combination between a 'good bird' for me as a birdwatcher and a very impressive and challenging bird to ring.
Thanks to Itai for the information help in ringing.
Other than that ringing is going slow down here with wintering Bluethroats, Chiffchaffs, Sardinian Warblers, etc. And some nice routine breakers such as Eurasian Sparrowhawk, Long Eared Owl, and Purple Heron; all caught recently.
We will be glad to see you all at the IBRCE,
Re’a & Tzadok 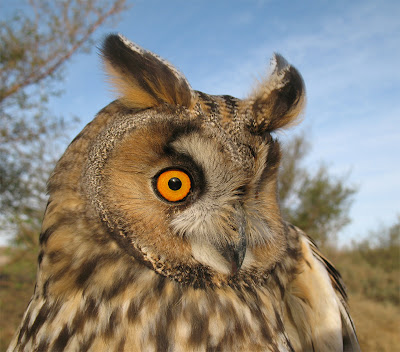