Every year in early autumn (August-September) 500,000 White Storks pass over Israel, mostly above the eastern Israel. Last season Helmut Eggers from Germany spent a few weeks reading White Stork rings in the Bet-Shean Valley and read about 120 rings. Recently I got answers from European ringing schemes - from Hiddensee and Helgoland (Germany) and from the Croatian Ringing Center. I am still waiting for answers from Poland, Radolfzell, Estonia, Hungary and Slovakia. Most of the storks were ringed as pullus in their nests in Europe. In our database we have about 450 White Stork foreign controls; most were read in the field or found dead. This is one of the species with the largest number of controls, after Lesser Black-backed Gull and Black Stork.
﻿﻿﻿﻿﻿﻿ 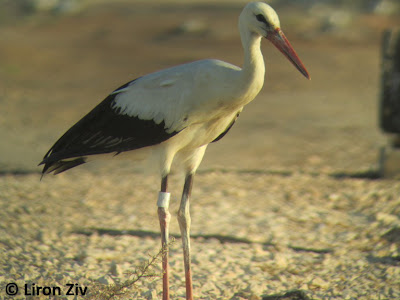 ﻿﻿﻿﻿﻿
Thanks to Helmut Eggers for his effort and report, to Liron Ziv for his images and to the European ringing schemes for supplying their ringing data.
Newer Post Older Post Home